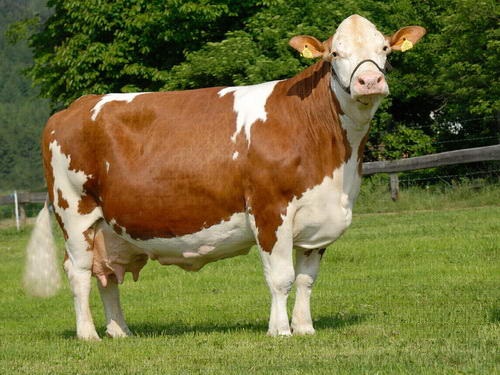 Fleckvieh is a hardy breed that can resist diseases, eats less and produces more high quality milk. Kenyan dairy farmers are used to the common exotic breeds of dairy cows such as the Holstein-Fresians, Ayrshire, Guernsey or even Jerseys.

For two years now, a new cattle breed has attracted the attention of Kenyan dairy farmers: Fleckvieh is a high yielding, dual-purpose cow that can be used for both dairy and beef production. Kenyan farmers who have discovered the qualities of this breed have introduced them into their herds. So far, more than 20,000 farmers in Kenya have adopted the breed.

“The Fleckvieh cow is durable, hardy and easy to handle even within a small farm,” says Dr. Anthony Gichohi from Fleckvieh Genetics (EA). “They are able to move easily even in the most difficult terrain. A mature Fleckvieh has good strength and body development. A mature cow weighs about 650-800 kilograms.

The breed has a very large and active genetic potential. We believe it is going to be one of the major breeds in the country once farmers discover its quality,” he says. Already, Fleckvieh is attracting a lot of attention and farmers want to try it.

Studies show that every 1 kg of milk from a Fleckvieh cow contains 4.2% fat and 3.7% protein. In addition, the milk is rich in other micronutrients and Omega 3 fats, which are vital for a healthy body. According to Dr Wanjohi, Fleckvieh bulls are fast growing and gain muscle at a rate of 1.5 kilogrammes per day for the first 200 days when cross-bred with other breeds, the farmer is assured of high quality of milk and beef. Under intensive fattening conditions, young bulls reach a daily weight gain of more than 1300 grams. In the first 6 months after birth, a bull can attain up to 300 kg with proper feeding and management.

Compared with other breeds, Fleckvieh owners will not have to incur huge veterinary bills – due to the breed’s ability to withstand some of the common livestock diseases, mastitis for instance – This is an inflammation of the udder that cuts down milk production. The infection is caused by somatic cells (dead cells) from the bloodstreams that get into the milk in the udder. Fleckvieh cow milk has lower numbers of somatic cells compared to other dairy breeds, meaning that Fleckvieh is less prone to mastitis; there is another advantage: Less somatic cells means: The milk lasts longer without refrigeration.

And, since Fleckvieh has a very thick skin, it is more resistant against diseases transmitted by ticks and tsetse flies- the proboscis of these vectors cannot penetrate the thick Fleckvieh skin.

An easy to handle cow

Farmers are usually more interested in the amount of milk a cow can produce. But what goes for Holstein-Fresian and other breeds, can as well be said of Fleckvieh: The amount of milk a cow produces depends directly on the feed it is given and the way it is kept. With sufficient and nutritious feed, a healthy cow can produce a lot of milk; if the feed is poor, the milk yield will be less. Farmers sometimes forget the relationship between the feed given and the milk output.

What makes Fleckvieh different from other breeds (Holstein Friesian, Ayrshire etc)? Fleckvieh cattle are economically productive: The breed has a more efficient feed conversion rate compared to other dairy cattle. Studies show that the breed can give more milk with the same amount of feed that is given to other breeds. For example, if a Friesian-Holstein dairy cow is given 60 kg of feed, the amount of milk it will produce is equal to what a Fleckvieh cow will produce with only 45 kg of same type of feed. With good management, Fleckvieh dairy cows have been proved to produce between 25-30 litres of milk per day. On second calving, it produces 30-35 litres, increasing this to between 30-40 litres after the third calving. The breed has a consistent milk production throughout the lactation period – this a big plus compared to other breeds. It produces milk steadily for 305 days a year without any decline. The breed has been known to produce up to 10,000 litres of milk in every lactation (milking period) with good management.

8 thoughts on “Fleckvieh a unique breed with high milk production”